In November 2015 Asma Meer posted this message on Facebook

“Hey lovely women. I am a Muslim mum and have been saddened by the awful events in Paris but also heartened by the countless people have said that they will not be divided. I want my children to live in not just a safe world but also a fair and enriching world. My son’s classmates have asked him about isis and I had to tell him how far removed Islam is from their actions.

I really want to arrange afternoon tea where people can come and ‘ meet a Muslim ‘ or just a tea party to show solidarity against Isis. If anyone is interested please inbox me. I know our local mosque and synagogue and churches have issued a joint press release but I would like to arrange something for us mums as we are the educators of our children . Peace and love”

The response was overwhelming with over 800 likes and 250 comments in just 2 days!! And in those two days we had offers from 3 community centres/churches offering to host.  We had our first event at Goldsmith’s Community Centre and you can watch what happened below

We have since held many other events – 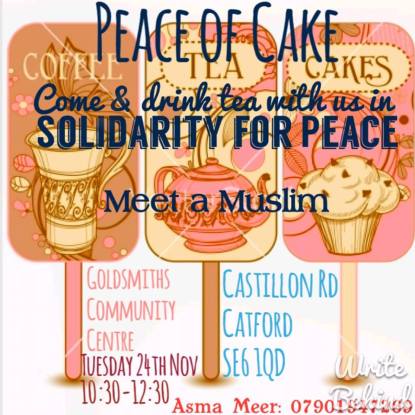 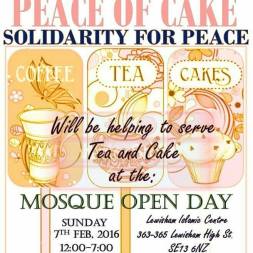 The Idea behind PoC is that if we keep talking then we will be less divided, less polarised
Peace of Cake works well locally and is for ALL ages, it brings people together and is SIMPLE.  Our aim is to replicate it around the world!
Asma herself has been nominated for a Pride of Britain award – more about it here